How to deal with large uninteresting areas of wood and brick in your garden.

Climbers and shrubs are good ways of covering the dull vertical but practical surfaces in your garden. Climbers tend to be fairly fast growing largish plants. They are very versatile and are a good way of adding height very quickly to a garden. Long before shrubs or trees reach 6ft (2m) or more, the climbers can be up there. They can be grown against flat areas such as walls and fences or better still in three dimensions over an arch - such as the classic rose arch - or a pergola or similar structure where they add dappled shade as protection from strong summer sun.

Don't plant within 15cm of a wall, it's very dry here, try to stay at least 30cm away, climbers can lean towards the wall.

Self-clinging climbers such as true ivies (Hedera spp.), Boston ivy (parthenocissus spp.) and climbing hydrangeas (Hydrangea petiolaris) can be planted against walls without supports such as trellis or wire (which they soon out-grow anyway). A wall in good condition should not be damaged by self-clinging plants, though be aware that they will mark, but not damage, window frames. Also, stop them at the top of the wall or they may grow between the roof tiles lifting them in the process. It's only an occasional brief job, something to be aware of rather than something that takes up much time.

Avoid planting self-clinging climbers against wooden fences, they find their way in between the fence boards. More importantly though, they keep the fence damp after rain as they are so close to the wood. This will have a significant effect on shortening the life of the fence. It won't exactly be falling down after 2 or 3 years but it won't last nearly as long as if the self-clingers weren't there. 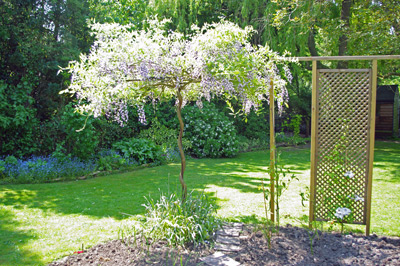 Trellis is much more visible than wires and so should be regarded as a feature in its own right if used. Even if stained the same colour as the fence, it is very visible. If you do use trellis, make sure its big enough for the plant climbing up it, climbers tend to be fairly large wide-ranging plants.

Picture right, a climbing Wisteria trained as a large standard next to Clematis against a free-standing trellis. Later in the season annual sweet peas at the base of the trellis will climb up when the Clematis has finished flowering.

Alternatively use shrubs that are suitable for wall training such as;

These are useful because they can be trained against the wall or fence to cover it, but also come out further from the support so take up more space (this may not always be required though). Wall shrubs tend not to be as quick growing as many climbers.

Always place the support before placing the climber.

On fences use climbers that twine, such as clematis and jasmine or use climbing roses. Place a net-work of wires held away from the fence with galvanized nails or vine eyes for support.

Use dark green PVC coated fencing wire (from a fencing supplier or hardware shop) it will be hardly noticeable against a brown wooden fence.

Rule number 1, place the wires before you plant the climber. Use 50mm galvanized nails hammered half-way into the fence. Two horizontal wires and vertical wires every 3ft (1 metre) or so will be enough for most climbers. (They're not really that horrible green colour, that's drawn so you can see the pattern)

Place all of the nails first and try to cut the fencing wire as little as possible as the wire at the ends must be wound around themselves and that can be hard on the fingers! You may find it easier to use pliers for this.

The pattern of wires should be symmetrical and one wire should run to ground level where the climber is planted.

Wind the fencing wire around the head of the nails. Take care especially on the higher wires as a well packed roll of wire can turn into unruly spaghetti with a mind of its own when opened. The end waving around at eye level could be very dangerous.

Using dark green plastic coated fencing wire, means that the support for your climbers is virtually invisible against most fences.

Dig the planting hole after the wires have been put in position, a semi-circle about 1ft (30cm) radius is sufficient for most climbers and means that you don't need to cut out a larger border. Keep this area free of weed and grass growth so that the climber can grow without competition.

When the climber has been planted, tie the stick that it has been climbing up in the pot to the wire that comes down almost to ground level. Don't tie the climber directly to the wire as many are easily damaged at the size that they are when purchased.

You will need to give your climber a bit of a hand in the first season at least. Thread wandering shoots behind the wires and generally give it a helping hand to discover where the supports are.