Signs - Irregular holes are eaten from leaves, slime trails often left around the plants on the soil and the leaves.

Damage - Young plants and seedlings are particularly vulnerable and can be stripped bare or eaten down to the ground. Particularly fond of Hostas and Delphiniums.

Treatment - Treatments abound for slugs and snails so there's no end of choice of options to try. My own personal approach is to not grow anything that they like eating apart from Delphiniums because I love Delphiniums. When the new shoots are emerging in the spring I scatter mini slug pellets around them and stop when the leaves are large enough to be less tasty to the slugs.

These animals feed mainly at night so if you are particularly bothered, you can go out and manually pick them off those plants most under attack.

Rings of material that is uncomfortable to cross such as sharp grit or broken egg shells or even human hair will sometimes discourage them, I did see an experiment on this on a gardening programme once and they happily crossed everything in their path. Maybe yours are different...

Plants in pots can be protected by greasing the rim with Vaseline and salt.

An old remedy to deter snails and slugs is to collect as many as possible, morning and evening. Tip them into a bucket of boiling water and let it stand for a few days until the smell becomes fearsome, then strain off the liquid and use it to sprinkle round vulnerable plants, such as the young growth of delphiniums, lettuce and so on - but not on them. The remains of the slugs and snails can also be scattered.

Sprinkle slugs with salt to kill them (if you can stand the resulting agony).

Stab them with a sharpened stick.

A circle of coffee grounds around a plant will act as a deterrent, it's the caffeine they don't like.

Trap them using containers in the ground that have some beer (the slug-pub) in the bottom, though you still have to get rid of them which is a problem if you don't hate your neighbour. Empty grapefruit halves work as well.

Get some chickens or ducks, they seek and destroy - and lay eggs too.

Another way to deal with your captured slugs and snails (I haven't tried it myself - my wife won't let me) is to put them in a plastic Tupperware-type container and then put them in the freezer. This is probably the most humane way as they just slow down and become torpid in the cold being cold blooded (yes they do have blood of sorts). So they are effectively anaesthetised before being frozen dead.

Plastic bottles.  Take a 1.5Ltr or 2Ltr clear plastic bottle and cut off the base with scissors. Remove the stopper and place over a single plant. A simple but effective way of protecting tender plants from slugs or the weather.

Electric fences are very effective. Two strips of metal tape, aluminium or copper with a small gap of a few mm between them connected to a powerful battery (old car battery or a couple of those big ones with the curly springs on top). Arrange it so that the slug or snail has to cross the barrier to get to your plants, as soon as they bridge the gap - Bingo! - doesn't kill them, but it sure stops them. You may sometimes see copper rings available commercially to place around individual plants.

Go out to the garden in the late afternoon and lay boards or pieces of cardboard on the bare soil around your plants. In the morning turn the boards over and scrape the hiding slugs into a container. Cover and place in your freezer for three hours. When they're frozen stiff (and dead), dump them on your compost heap.

Icelandic poppy, Columbine, Forget-me-nots and Welsh Poppy are all unpalatable to slugs. 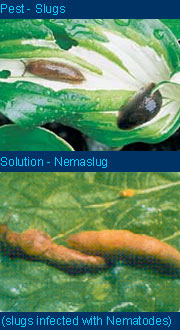 Another option is to go for biological control. Biological control of a pest relies on introducing a predator species so "fighting nature with nature", if chosen carefully, the predator will stop damage to your plants without damaging the environment. Such biological controls are safe for the user, children and pets. They will not harm other beneficial garden insects and are biodegradable.

They do rely on the predator always having some food though, or they will die out, so like other organic practices it is a question of maintaining a small population of pests to allow the predators to be ready for them, in this case though the balance is skewed away from the problem.

For slugs and snails, the biological control is a Nematode worm (Phasmarhabditis hermaphrodita) sold as "Nemaslug". The nematodes aggressively search out and attack slugs. They enter the slugs body through a hole behind their heads (the pulmonary aperture that they breathe through to be precise). Once inside they release a bacteria which stops the slug eating. The nematodes then start to reproduce inside and within 7-10 days the slug is dead. The nematodes continue to reproduce as the body breaks down. This new population enters the soil and searches out new slugs to attack. This is a natural, non-toxic product that is safe for both users and wildlife. The nematodes stay active for 6 weeks so a single dose protects plants when they are emerging in the spring and are most vulnerable.

Nematodes can only be used in late spring and summer when the soil has warmed up (to above 5°C). On heavy, waterlogged clay soil, the nematodes can find it difficult to move, so Nemaslug can be less effective in these conditions.

Questions Received on Slugs and Snails

Q. Is there any repellent to stop slugs coming into my house. I cannot track how they get in. I have learned to love them but not in my lounge. Thank you for your marvelous website.

A. Repellent - not really unless you fancy scattering coffee grounds or slugs pellets in the living room. You'll just have to crawl around and try and work out where they come in and then stop them. Being soft bodied they can squeeze through small spaces. The best way to find out is to follow the slime trails. They often get through gaps in doors and window frames, so check there and maybe use draught excluder tape or similar. Do you have air-bricks or the like on the outside of the house? Ground level is the most likely, but at certain times of the year I get snails crawling over the front of my house up to about 15 feet from the ground.