Every species of plant or animal that has yet been discovered has at least one unique parasite or disease that affects it uniquely. So there are more parasites and disease causing organisms than any other kinds. Fortunately (I use the word in a relative manner) there are not so many pests and diseases that the average gardener will come across and in most cases it will be one of the following.

Damage - A very common fungus which produces spores that are always around in the air. They attack plants through areas of damage. At first, small pale brown or white patches appear as the plant tissue starts to rot.

Signs - Very descriptive these fungal diseases - looks like the pant is going rusty. Orange-brown pustules develop initially on the undersides of leaves. These may be unnoticed for some time, so by the time the pustules appear on the upper leaf surface and are noticed, the disease has taken hold.

Damage - Badly affected plants can be so weakened they are unable to withstand winter frosts.

Underside of a hollyhock leaf with rust, often what doesn't look so bad from the top is worse when the leaf is turned over.

Signs - Purplish-black usually rounded blotches appear on leaves, which then start to yellow and fall early. Stems may be affected in severe cases.

Damage - Badly affected plants may die as they are so seriously weakened they cannot withstand the winter frosts. It is very unsightly.

Blackspot on a rose leaf, a bacterial disease rather than a fungus.

Signs - White powdery mould appears on the leaves, stems and buds. Young growth in particular is affected. The disease is encouraged by the plant being dry at the roots with damp stagnant air around the top.

Damage - Looks unsightly and causes leaves to drop early. If the plant is well established this is a relatively harmless disease. However, care should be taken with younger plants since these may be drastically weakened.

The year of the fungus

Some growing seasons every few years or so seem to become the year of the fungus. You start to notice it on all kinds of plants that have contracted some vague illness that can't quite be pinpointed. Discoloured leaves that are brown at the edges, maybe tending to black, but still alive rather than dry and crispy.

Sometimes there is a "sooty" deposit on plants, this is almost certainly "sooty mould" that is not growing on the plant as such, but on the sticky honeydew exuded by aphids higher up in the leaves. The sooty mould is a fungus that feeds on the sugary excretions, in itself it will not directly harm the plant, but it will cause discolouration and block light. The honeydew itself will also make it easier for other infections to take a foothold.

Brown patches on hedges, conifers and other trees that have been growing slowly for some time, may suddenly become much larger and kill more of the hedge or tree. There are a number of possible causes of this - all fungal. What is probably happening is that the hedge or tree has been poorly for a while, but this warm damp summer came along and it became party time for the fungus. What can be done about it? Not a lot really once it's started to happen. It's more a case of removing dead or dying growth that may spread within the plants and then in the future carrying out basic hygiene. Dead leaves for instance from diseased plants should leave the garden in the wheelie-bin,  down the tip or up in smoke, they shouldn't go on the garden compost heap or the infection will continue.

Spraying your plants with a general fungicide will help to reduce the effect or extent of the infection, but not completely eliminate it.

A garden is simply a collection of novel exotic food for all the local pests and diseases to have a go at!

Q. There are large patches of toadstools on my lawn. I believe they may have come from a "puffball" type which my son hit with a stick, spreading the spores everywhere! They now are spreading and grow very quickly. Please can you recommend something to kill them permanently.

A. There aren't really any effective fungicides for lawns as the fungi involved are as tough as old boots, propagate like anything and are large and spread out under the ground.

The only effective strategy is to remove the food source which will either be something rotting under the soil or most likely a bed of thatch in the lawn, so you need to scarify well and improve drainage.

It's unlikely that you son's actions caused them to appear everywhere as fungi like puffballs need to be quite old (more than a year) before they produce fruiting bodies. I'd guess what you're seeing is the produce of at least a years worth of activity under the ground. Also, puffballs will only produce more puffballs, if you now have toadstools, they are a different species altogether and you have a range of fungi. 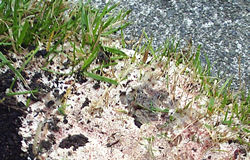 Q.  I have a problem with my lawn and I was hoping that you could give me some advice on how to get rid of it. It is a white growth which is spreading in small patches. When it has grown it is goes hard and on the lawn surface looks like vomit. I keep digging it out but it just keeps growing back and is slowly spreading outwards away from the originally infected site. I have attached a photo I have taken, hopefully this will help you.

A.  What you have is a very impressive case of turf thatch fungal mycelium. The cause is fungi that are living on the thatch - the dead grass and other debris just below the living leaves and above the soil. The most susceptible lawns are those that have not been maintained very thoroughly or sometimes, newly laid lawns from turf. The solution is to carry out all of the heavy-duty Lawncare chores such as scarifying and spiking to aerate. Collect your lawn mowings rather than let them lie of the grass and add to the thatch. It's not a disease as such, but a case of opportunist fungi making the most of an abundant source of food. Our damp summer would have made it worse. You may need to dig up very badly affected areas and re-seed or re-turf.

Q. We laid 120 sq. m. of turf (supposedly grown from seed) about 6 weeks ago. The whole area is now covered in toadstools too many to pick by hand. How can we get rid of them?

A. The toadstools have to be feeding on something and my guess is that they're feeding on something in the soil, i.e. not in the turf that you have bought. The only way to get rid of them for good is to remove whatever they are feeding on. The only time I've come across a similar situation was when some-one used bark chips to level the ground before laying the turf. Result, the nice dark and moist conditions underneath the turf along with a good food supply from the bark chips meant a very healthy crop of toadstools.

Is there anything like this under your turf? It may be caused by pieces of wood squashed into the soil and covered over (common in new homes as builders aren't too tidy especially when things will be hidden), or alternatively by rotovating in old grass or weeds and not clearing them from the site before laying the turf.

What to do about it? If it is bark chips and you paid some-one to do it I think you've a good case to get them back to sort it out. If not, then it will sort itself out in time when the conditions change and the food supply is exhausted. Cut the toadstools down with a mower or just knock them down with a broom or besom, they'll soon dry up and shrivel to nothing. Fairy rings are the only fungi that will really harm a lawn and it doesn't sound like you've got any of those.