Q.  I need some information on how to plant a hawthorn hedge. We have loads of hawthorn trees and I was wondering can I cut snips of them and when is the right time to do it.

A.  Mid to late summer with semi-ripe cuttings in a 50:50 sand/peat or soil mix in the shade. An open coldframe would be a good place to strike them.

Q.  My bluebells have come up blind is this because they are planted too deeply?

A.  Could be that or maybe they weren't big enough to produce flowers this year. This can also happen if they're in too dark a position and so don't get the opportunity to build up reserves for the next year after they've flowered. I'd give them a general feed about now, gromore, blood fish and bone meal, you could even wash it in with a dilute liquid feed too as long as the grounds not too soggy.

Q.  My Passionflower is bearing fruit this year. can I eat them? 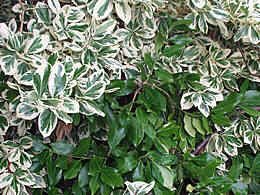 Q.  I have an evergreen plant with variegated leaves - name unknown - which has suddenly only got plain green leaves. Any ideas what to do?

A.  Cut the green ones out quick (and the stems they're on too) they'll take over the whole plant in time and it won't be variegated any more.

Q.  How and when do Cytisus lena & broom require to be pruned, how much to cut. My ones this year have outgrown all the plant specifications and are almost double the size Help, your assistance will be greatly appreciated.

A. They should have been pruned immediately after flowering as they flower on the recent year's growth. I guess if that's not been happening it'll explain why they're so big.

Could you prune them now? I'm not sure I've never left it so late! Large old brooms don't grow again from old wood and are usually replaced rather than successfully renovated. If you do nothing now, they'll almost certainly flower again next year, but be even bigger, but then you can prune after flowering but don't cut into old wood. If you prune now, they'll probably flower again next year, though may resent the disturbance and sulk for a year. In any case brooms are fairly short lived and yours sound like they might be getting ready for replacement.

I suppose it'll be a balance between how much space they take up and how much you like them when they're in flower.

Q.  My wife appears to have green thumbs! every year she finds a new fruit seed to plant "just in case I can grow a plant from it", and the damn things keep coming up! We now have a 4ft high date palm, grown from a Christmas date stone 2-3 years ago. The problem is, it no longer fits in the house. How can we protect it from the typical English winter weather, please?

A. To be sure of keeping it alive it needs to be in a greenhouse or conservatory, they're not really outdoor plants in the UK.

If you've no choice but to put it out, then place it in the warmest and sheltered part of the garden possible, facing South, South West ideally and not in a frost hollow. When the frosts start it should be wrapped in bubble wrap or similar, tie the leaves together and cover the pot, stem and leaves. You can use straw held in place with string and provide an outer layer of an old reed mat or similar as bubble wrap isn't very pretty.

They are hardier the larger they are, though 4 feet is still a small one by palm standards. Realistically I don't expect it to survive well, if it does, then see it as a bonus.

Q.  Our camellia as something like soot on the leaves please could you tell me what I should do is there a cure for this and what could the soot like stuff be?.

A.  The soot is probably "sooty mould" it's a fairly harmless fungus that usually grows on honeydew secreted by aphids, on the leaves below where they drip it. The fungus is unsightly and stops light and air getting to the leaves but doesn't attack the plant in any other way.

It's rather unusual at this time of year (April) as there aren't many aphids around, if your plants are under cover though there's likely to be more of them.

There is no direct cure, but spraying the aphids will usually remove the cause of the problem and then it's a case of spraying the plant leaves with water to remove the honeydew and the remaining mould.

WARNING - if your Camellias are under cover, don't spray the leaves directly with water from the tap, the chances are it will be pretty cold and may well cause them to drop their flower buds. If possible, don't spray them at all until after they've flowered, if you must, use water from a can with a fine rose that has been left by the plants for 12 hours or more to reach the same temperature before use.


Any Questions
Gardening Q and A