Pears are an easy and generally reliable tree fruit to grow in the UK but it doesn't always go perfectly, these are some of the commonest ailments that might affect your pear trees along with tips to aid your crop 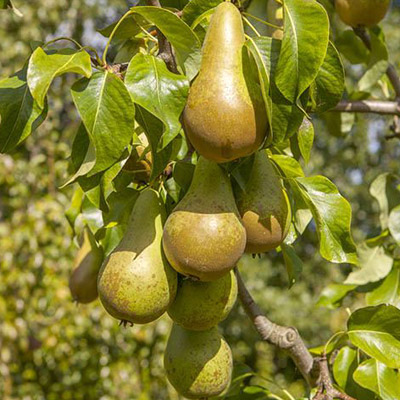 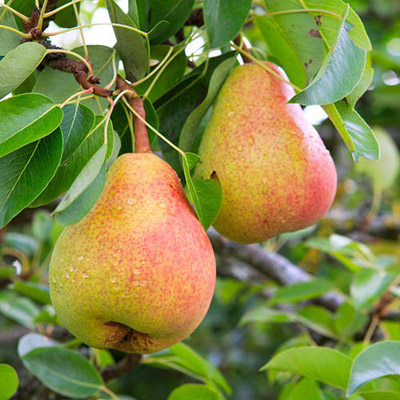 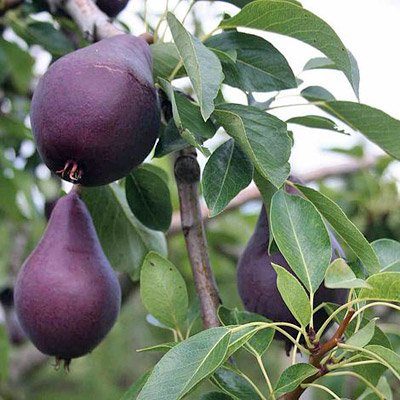 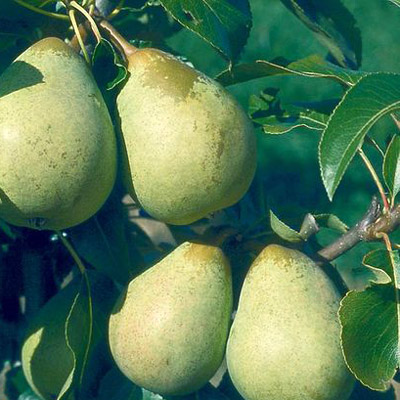 Pears are a cool climate fruit, they require winters that are long enough and cold enough to provide them with a sufficient "chilling requirement" if they are to fruit reliably. They are a little more demanding than apples - a similar cool climate tree fruit - in that they need more sheltered, warmer conditions in the growing season and in particular shelter at flowering time which happens earlier than with apples. Bad weather at flowering time can inhibit pollination and reduce that years pear crop.

Pears are best regarded as not being self-pollinating. Some are (sort of) but almost all do better when they have a pollination partner. The variety "Conference" can form almost banana shaped fruits when self-pollinated for instance, but reverts to the usual pear shape when cross pollinated. Others varieties don't set fruit hardly at all without a pollination partner.

Training and pruning - pears are pome fruits (they have many small pips rather than a single large stone such as plums) and so are pruned while dormant in the winter months. The best time is after the harshest of the winter weather is over, but before the buds break for spring. Winter pruning should be to thin out the fruiting spurs with the removal of one or two larger branches as appropriate to promote younger growth. Fruit thinning may be required sometimes as a very heavy crop may be set.

Q. Why do my pears not do so well while my apples are fine?

A. Pears are not as all round tough and resilient as apples. They don't like exposed positions, shady positions or frost pockets. Early flowering means that the flowers may be damaged by frost and that there are less pollinators around. Pears need another pollinator tree generally and there are usually less pear trees around than apple trees in neighboring gardens, so you are more likely to need to provide your own. Pears also need more sun and autumnal warmth to ripen the fruit. A final and possibly important reason is that allowing grass to grow under a pear tree will make conditions more difficult for the tree as pears don't like competition.

Q. Can I grow a pear tree from a pip?

A. Yes you can, but in general I wouldn't bother. If you buy a named pear tree, you usually get a grafted named variety on a rootstock that determines the tree's size so you're buying a "pedigree". If you grow from seed you're growing a mongrel, now while mongrels might be great dogs, they're no so great when they're fruit trees.

The most likely thing to happen is that you'll get a large vigorous tree that has so-so fruit, less likely you might get a poor or good tree. So you might as well pay not a lot of money over the lifetime of the tree to get something that is pre-determinedly well worth having. A seed grown tree generally won't flower for at least 5 years - considerably more than a named grafted variety. If you've the space, time and inclination, it might be fun but you're much, much more likely to get something worse than a named variety. Named varieties are bred like this, but once the variety is developed, it will subsequently be grated onto better rootstocks in the future, essentially after the first ten or so years, the process starts again.

Q. The ends of many new shoots on my fruit tree are dying back, is this serious?

A. This is a common ailment particularly in late spring to early summer, new shoots in particular die back for the end 4-6" killing a few leaves in the process, the leaves shrivel up turn brown and die. It is a result of fungal infections affecting each shoot individually - i.e. it's not a disease that the tree gets as such, but one that each affected shoot contracts as an individual infection.

By the time you've noticed it on a tree it will be too late and the damage is done. It is not often serious and the tree shakes it off, the way you shake off a cold. Damaged shoots and leaves can be cut off, or I just leave them a while and then crunch up the dead dry leaves with my hand.

Q. There are loads of strong vertical shoots growing from my tree, is this a problem?

A. This is the usual response of a mature tree to having too much wood removed in one go - to produce a mass of "water shoots". The shoots are best left to reach at least 1-2ft in length and then removed in stages over months at least if not a couple of years, leaving only enough to replace what has been removed. If they are removed too quickly when too small, the tree simply makes a load more.

Q. My pear tree looks healthy and produces flowers, but never fruits, why might this be?

A. There are two likely reasons for this. If it flowers early in the season and you live in an area with many late frosts, then it could be that the flowers are being damaged and fall before they can be pollinated. It could be that your tree requires another for cross pollination, in which case bring another in.

Q. My pear tree crops heavily some years, but then produce little or nothing the year after, why is this?

A. Your tree has got into the habit of "biennial bearing". This means that in the first year it puts so much effort into producing a large amount of fruit, that it needs a year off to recover and build its strength back up.

The answer is to thin out the fruit in early-mid summer. A rule of thumb here is to leave one fruit per leaf area the size of your hand, but this is not easy to gauge, especially when the fruits are concentrated in some places and not found at all in others. Remove damaged, crowded, very small, malformed, diseased etc. fruits leaving only the best to develop, you need to be a lot more ruthless than you think, probably at least half of all small fruits can be removed.

Q. My pears are maggoty, how can I prevent this?

A. In mid to late summer, this is likely to be the caterpillars of codling moths. The caterpillar enters the fruit while it is very small feeds in the core of the fruit and then exits by the time the fruit is ripe by a hole usually near the blossom end of the fruit. Treatment is by the insecticide bifenthrin in early summer followed by another application about 2 weeks later. The timing of the application can be gauged using pheromone traps to see when the moths are most active. Alternatively if you don't want to apply an insecticide, then pheromone traps can catch enough moths if the trees are reasonably isolated to reduce the number of maggoty pears. You will never really totally control codling moths.