Plums Damsons, Greengages and Mirabelles are all cultivars derived from the European Plum, Prunus domestica, they are one of the easiest of tree fruit to grow in the UK but it doesn't always go perfectly, these are some of the commonest ailments that might affect your trees along with tips to aid your crop 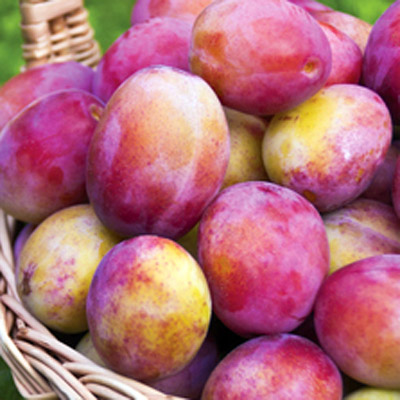 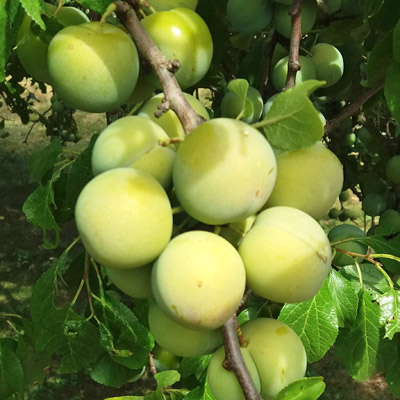 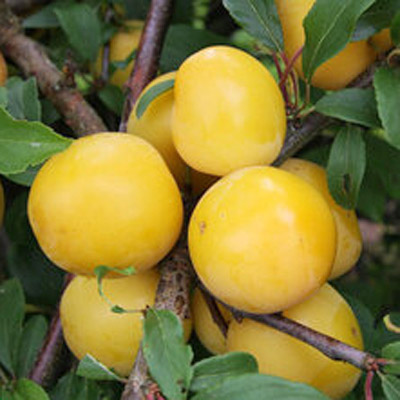 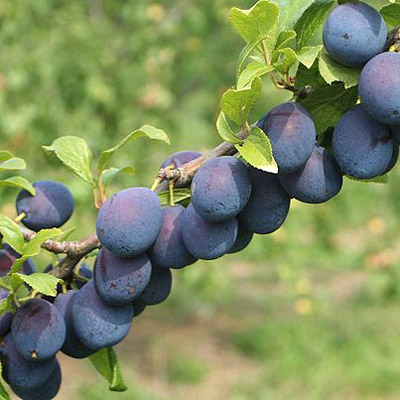 The only vulnerability of plums is that they flower early in the spring and the blossom may be damaged by frost reducing that years crop. Birds often eat the flowers which can also affect the crop, I'm fortunate in that there's only a pair of collared doves that get at mine and I can live with the limited damage that they do. They seem to keep others out of the garden and I feed them more at plum blossom time so they're less likely to go for the flowery salad.

Plums are not self-fertile other than the admirable "Victoria" variety, though given their size it is not too difficult to have 2 or 3 for cross-fertilization in the same garden. Like apples and pears, plums are grafted onto a rootstock which determines their ultimate size, with the grafted portion being the particular variety of plum. Suckers may be produced from below the graft junction which should be removed as seen.

Training and pruning - Being drupes (stone fruits) plums should not be pruned in the winter months as they are susceptible to the fungal disease silver-leaf. The bush form is the easiest to maintain and most effective in the average garden. Over the first three years an open crown with four strong branches should be allowed to develop. Pruning needs only to remove obvious shoots and branches that are damaged, too thin and long, crossing or in the wrong place. Cut out branches that try to grow vertically to make sure you can reach your plums more easily.

Q. A young plum tree I recently planted (purchased in a dormant state) does not look healthy and is mildewed, however, what would appear to be a sucker, growing from the base, is doing well and budding as usual. Should I cut back the original tree growth to ground?

A. It's far more likely than not that the sucker is part of the root stock of the plant and not the cultivated plum that you bought it for. Cultivated fruit trees have a well performing variety of top growth grafted onto a wild or semi-wild rootstock. That way you get the quality of fruit and top-growth that you want but with the vigour of native rootstock. Cultivated varieties tend to have fairly poor roots.

If the top growth has died, the sucker will be from the rootstock and while vigorous will produce poor quality fruit. Best to pull it up and start again. Might be worth asking for a replacement from where you bought it if you treated it properly i.e. didn't keep it in the wrong conditions for too long (weeks) before planting it.

Q.  I Was left a plum tree by my father which I planted 4 years ago I don't know a lot about plum trees but this year I had fruit grow which weren't very big or looked edible but the tree has grown to about 12 foot and has a thin trunk which bends over could you tell me if it needs pruning or trimming as I haven't got a clue and it is important to me that I look after it as best as I can your help would be greatly appreciated.

A.  Difficult to say really without seeing it. It sounds like it's not happy where it is planted, is it in the shade, poor soil conditions? getting a lot of competition?

What variety of plum is it? Could it be a damson tree? they're small and used for cooking usually. Sounds odd that it's bending over.

So, what to do? Clear the ground around the base at least 2 feet in radius and apply a thick mulch of garden compost. If it needs supporting, then 3 short stakes with long ties each about 2 feet from the trunk and tied quite high up would work or a single 6 foot tall post next to the trunk, but this might damage the roots if you dig or hammer it in.

To be honest a tree that is that condition and is 12 foot tall doesn't have a lot of chance to become normal. It's either in the wrong place or it wasn't staked correctly when it was developing. I assume it has a sentimental significance, so it's worth trying what I've suggested, but if it didn't I be considering replacing or risking moving it to a more advantageous position - a lot of work and no guarantee of success.

I thought I should give you some feed back on the advice you gave me last year.

As advised by you, I cleared the grass for about 2 feet from the trunk and gave it a good dose of potash last summer. In the autumn I gave it a good amount of mulch ( rotted compost heap material) and followed up with another potash feed in the spring. The results have been tremendous with a big crop this year, although the size of the plums has been small (probably due to the real lack of rain here).

So all in all a very satisfactory result. Many thanks for the advice.

Q. Why do my plums not do so well while my apples are fine?

Plums are early flowerers in the spring and may be affected by frosts as are pears, but if plums do well locally, you need to look to other reasons. Drupes - fruit with a single large pip or stone - tend to need soil with more nutrients than pomes - fruit with many small pips such as apples and pears. Drupes also need a reasonably limey alkaline soil to do well so a dressing of lime and fertiliser will help them to do better.

Q. Can I grow a plum trees from a stone?

A. Yes you can, but in I wouldn't bother. If you buy a named plum tree, you get a grafted named variety on a rootstock that determines the tree's size, you're buying a "pedigree". If you grow from seed you're growing a mongrel, while mongrels might be great dogs, they're no so great when they're plum trees.

The most likely thing to happen is that you'll get a large vigorous tree that has so-so fruit, less likely you might get a poor or good tree. So you might as well pay a small price over the lifetime of the tree to get something that is pre-determinedly well worth having. A seed grown tree generally won't flower for at least 5 years - considerably more than a named grafted variety.

Q. The ends of many new shoots on my fruit tree are dying back, is this serious?

A. This is a common ailment particularly in late spring to early summer, new shoots in particular die back for the end 4-6" killing a few leaves in the process, the leaves shrivel up turn brown and die. It is a result of fungal infections affecting each shoot individually - i.e. it's not a disease that the tree gets as such, but one that each affected shoot contracts as an individual infection.

You could treat the whole tree for the fungal disease, but usually by the time you've noticed it, it's too late and the damage is done. It is not often serious and the tree shakes it off, the way you shake off a cold. Damaged shoots and leaves can be cut off, or I just leave them a while and then crunch up the dead dry leaves with my hand.

Q. There are loads of strong vertical shoots growing from my tree, is this a problem?

A. This is the usual response of a mature tree to having too much wood removed in one go - to produce a mass of "water shoots". The shoots are best left to reach at least 1-2ft in length and then removed in stages over months at least if not a couple of years, leaving only enough to replace what has been removed. If they are removed too quickly when too small, the tree simply makes a load more.

Q. My tree looks healthy and produces flowers, but never fruits, why might this be?

A. There are two likely reasons for this. If it flowers early in the season and you live in an area with many late frosts, then it could be that the flowers are being damaged and fall before they can be pollinated. It could be that your tree requires another of its type for cross pollination, in which case bring another in.